19 Questions About LSD for Bicycle Day

On April 19th, 1943 in Basil, Switzerland, chemist Albert Hofmann took the world’s first trip on LSD.  The compound, which he had invented 5 years earlier, would come to change the world.  After taking the LSD, Hofmann began to feel sickly and decided to ride his bicycle home from his laboratory at Sandoz Pharmaceuticals; April 19th is now celebrated in the psychedelic community worldwide as Bicycle Day.

Today being Bicycle Day, we wanted to take the opportunity to clear up some confusion in psychedelic culture surrounding LSD.  Here we will tackle some of those questions and see if we can’t straighten up the confusion. 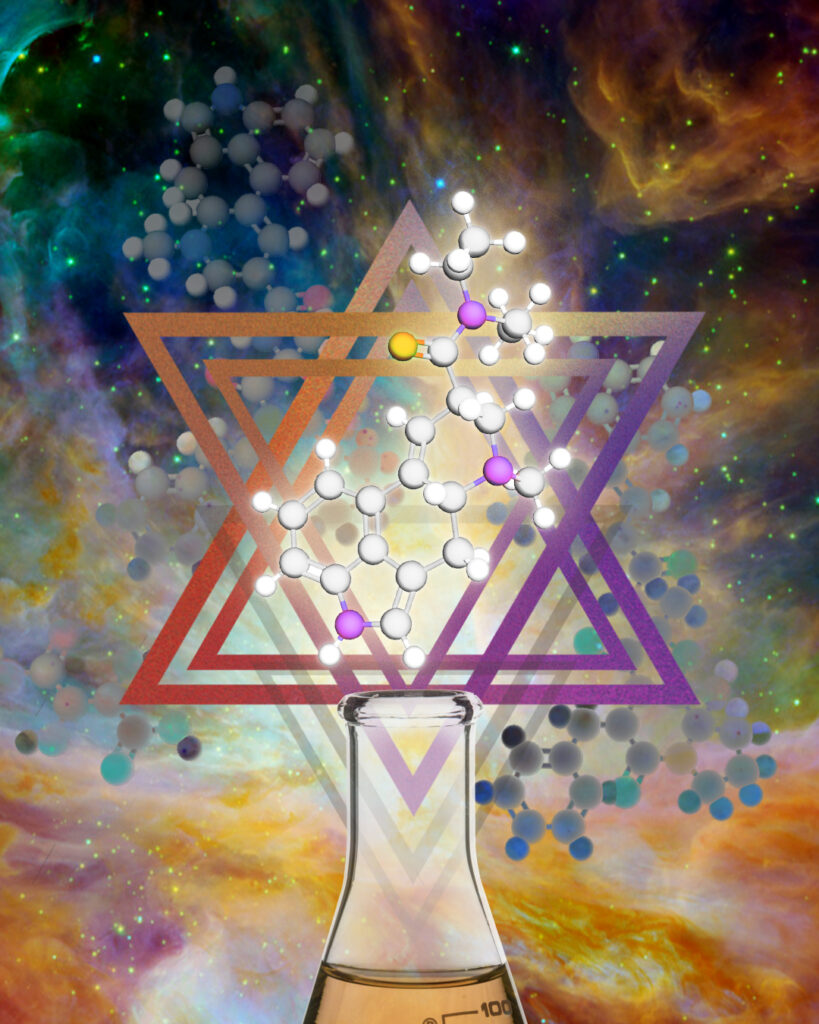 1. Is LSD natural or synthetic?

LSD is often considered a semi-synthetic drug because it is made from a natural precursor.  This natural precursor is called ergotamine and is a dimer (two molecules linked together) derived from a fungus that grows on rye.  This fungus, ergot (claviceps purpurea), produces fruiting bodies like other mushrooms do. The fruiting bodies grow on a structure called a sclerotium, which are harvested, ground up, and extracted to get ergot alkaloids (nitrogen containing compounds), one of which is ergotamine.  This natural product, ergotamine, is then used as the first step in a chemical synthesis to make LSD, which itself is not known to be found in nature*[2].

Its close chemical relative LSA, however, is found being produced by endophytic fungi living in species of Morning Glories and of Hawaiian Baby Woodrose.

2. It is often claimed that Albert Hofmann took a very large dose of LSD on April 19th 1943, the day known as Bicycle Day, the first time Hofmann purposefully ingested LSD.  Is this true?

No, he took a fairly common, although powerful dose by today’s standards.  Hofmann consumed .25mgs of LSD or 250 micrograms, the equivalent of 2.5 standard* blotter tabs [2].

*(Please note blotter tabs are not standardized and therefore it is should not be assumed that any street LSD blotter contains 100 micrograms of LSD.  This is further complicated by the fact that 100 micrograms of different LSD salts vary in potency by weight.  Hofmann ingested 250mcgs of LSD tartrate.)

3. On the first Bicycle Day, Albert Hofmann took 250mcgs of LSD tartrate.  What is LSD tartrate?

LSD tartrate is a salt of LSD.  LSD is an alkaloid, a compound which contains a basic nitrogen.  To balance out the charge, most alkaloidal drugs are made into a salt, which means an acid is added to neutralize the part of the molecule that is a base.  In this case the acid was tartaric acid.  The version of LSD which is not a salt is called LSD freebase [2][7].

LSD-25 was the laboratory designation Albert Hofmann gave to LSD since it was the 25th ergot alkaloid he synthesized.  The 25 does not have any chemical meaning and ‘LSD’ and ‘LSD-25’ are the same [2].

5. Did Albert Hofmann actually bike home from the lab on that day or did someone help him?

He did actually ride his bike home unassisted, although he was accompanied by his laboratory assistant [2].

6. Does LSD make you clinically insane?

It depends on what you mean by ‘make’.  LSD itself has never been demonstrated to cause physiological damage*, however like many psychedelics and cannabinoids, it can precipitate a psychotic break in predisposed individuals.  There are many examples of this, included most famously CIA agent Frank Olson who committed suicide by jumping from the window of a Manhattan hotel after being dosed with an unknown quantity of LSD without his knowledge or consent**.  If there is a history of psychosis in an individual’s family, they should not take LSD [4][5][6].

**There are alternative theories that the CIA murdered Olson because he witnessed the illegal torture of a CIA detainee and then blamed LSD to cover up the murder.

7. Does LSD need to be stored in a freezer?

Not necessarily.  LSD is not particularly sensitive to heat although it can volatilize/evaporate at high temperatures.  It is, however, highly sensitive to moisture and light, so storage at room temperature in a dark dry place is sufficient, no need to refrigerate.

Chemistry explanation: LSD has two labile protons at C5 and C8 which can epimerize (of the 4 optical isomers of LSD, only (R,R) LSD is considered LSD, the other 3 have other common names) and the compound will lose activity, enamine reactivity at carbon 3 (creating the inactive 3-chloro-LSD), and Michael acceptor functionality at carbon 9 (creating the inactive lumo-LSD) [2].

8. Some scare stories claimed that LSD mixed with the lethal poison strychnine has been found on the street.  Is this true?

There is only one known account of a mixture of LSD and strychnine being found and it is a spurious case itself.  In 1972 in the journal Microgram (ironically named in this case), the Bureau of Narcotics and Dangerous Drugs reported red capsules containing this combination were recovered in upstate New York.  The analysis of this material was never independently confirmed [1].

9. Why does some LSD feel different than other LSD?

There is no simple answer.  While synthesis impurities may play some roll, there is no evidence to support this and no reason to believe that anything contributes more than set and setting to variations in LSD experiences. Rarely, street LSD is adulterated with small qualities of other compounds such as amphetamine or NBOMe series drugs, which would cause a change in perceived subjective effects.

10. Can LSD absorb through the skin?

Yes, LSD is rapidly absorbed through the skin.  Skin exposure to liquid or solid LSD without proper personal protective equipment will rapidly precipitate an LSD intoxication.  This includes touching blotter paper.  LSD should always be handled with extreme caution [2].

11. I have heard the terms ‘fluff’ and ‘needlepoint’ to describe “types” of LSD.  Is there any truth to these terms?

It is sometimes claimed in LSD culture that these terms relate to different ‘parts’ of the LSD crystal.  There is currently no evidence to support the claim that the ends vs the body of LSD crystals produce different effects, and no reason to think chemists could or do separate out these components.  The difference is likely explained purely by the expectancy effect; once a person thinks that a certain LSD blotter is ‘fluff’ or ‘needlepoint’ they are likely to experience what they expect that type of LSD to cause.

This question baffled scientists for decades.  The answer was finally discovered by the legendary psychedelic chemist David Nichols in 2018; the diethyl amide part of the molecule ‘hooks’ into a part of the serotonin 2A receptor, closing a molecular ‘lid’ over the molecule, and causing the LSD to remain bound to the receptor (and therefore the person to trip) for an extended period of time despite rapid clearance of the drug by the human body [10].

13. If LSD stands for Lysergic Acid Diethylamide, why is the drug called LSD instead of LAD?

Albert Hofmann was Swiss German, spoke Swiss German, and lived in Basil, Switzerland when he first synthesized LSD.  The German word for ‘acid’ is ‘säure’ and therefore Hofmann named the compound Lysergic Säure Diethylamide, or LSD.  There is a compound closely related to LSD, also invented by Albert Hofmann, called LAD-52 (Allyl LSD), which takes the English acronym [2].

A death caused directly from the physiological toxicity of LSD has never been recorded in humans.  However, many people have died or killed themselves indirectly from various behaviours while high on LSD (often called behavioural toxicity).  Behavioural toxicity is very common with other drugs however and does not make LSD particularly unique in this respect, with alcohol being the best example [5][6].

There are several reasons, the first of which being the start of World War II with Germany’s invasion of Poland in 1939.  While Switzerland remained neutral, supply chain disruptions forced rationing in Switzerland.  In addition, Hofmann’s first tests with LSD-25 appeared to show no useful pharmacological activity [2].

LSD is significantly more difficult to synthesize than other common illicit drugs which require chemistry to make such as DMT, methamphetamine, and MDMA.  Not only is ergotamine tartrate exceedingly difficult to acquire, whether by purchase (it is heavily controlled) or by extraction from ergot, LSD is extremely sensitive to light and moisture, and for these reasons the pure product is difficult to obtain via synthesis.  Newly invented peptide coupling reagents have made the synthesis easier, but these reagents are also expensive and difficult to acquire.

Yes.  He is quoted in his memoir as saying “Taking LSD was a profound experience, one of the most important things in my life[3].”

18. What is the connection between the Grateful Dead and LSD?

LSD is integrally linked with the history of The Grateful Dead.  The band became popular as the musically accompaniment to parties thrown by the famed American author Ken Kesey.  These parties, or ‘Acid Tests’ as Kesey and his circle the Merry Pranksters, dubbed them, were thrown in warehouses or on the beach in Lagoona, CA.  The Pranksters provided libations dosed with large quantities of LSD for free and the entire party would trip and listen to the Grateful Dead.  The sound engineer for The Dead, Augustus Stanley Owsley, was also an LSD chemist who made the LSD for the Acid Tests.  He also drew the famous Grateful Dead symbols, the Stealie and the Dancing Bears.  The Stealie features a lightning bolt with 25 angles inside a skull, meant to represent LSD-25 inside a person’s head; the name Stealie is short for ‘steal your face’ a phrase used to describe tripping LSD.  Owsley’s nickname was ‘The Bear’ which may have contributed to the symbology of the dancing bears, who represented people dancing while high on LSD[11].

If you still have any other questions about LSD, feel free to send us a message and we will do our best to answer them!  LSD has a complex history that continues to be written, and it seems all but certain that Bicycle Day will continue to be celebrated far into the future.  Please be careful and celebrate Bicycle Day responsibly.

At Unlimited Sciences we feel some of the most valuable scientific data regarding psychedelics come from the naturalistic experiences of real people who really use these substances.  If you are able, please consider a donation to support the creation of our General Registry, which will look at how people use LSD, and many other psychedelics, in natural settings.