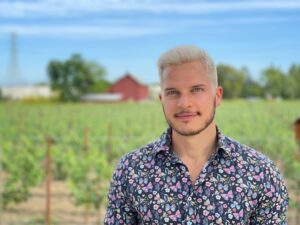 Research Director Matthew Lowe is no stranger to the world of neuroscience and psychedelics. As previous Director of Research at Stanford Medical School, he worked closely within the field of mental health. It was during this time that he recognized the limitations of traditional treatments, and the promising therapeutic value of psychedelic substances. He left his academic career to further pursue research and advocacy in this important field. In 2021, Matt joined the Unlimited Sciences team, where his expertise continues to bring the current psychedelic renaissance to new heights. We chatted with him to learn more about his hopes for the future of psychedelics, the arrival fallacy phenomenon, and the importance of real-world studies as part of this movement.

Tell us a little about yourself and your background.

I grew up in the beautiful city of Cape Town, South Africa. By the end of my bachelor’s degree in psychology and social anthropology at the University of Cape Town, I had a growing interest in human neuroscience and uncovering the mysteries of the mind. I realized these interests could be more fully explored abroad, so I left Cape Town and moved to Toronto, Canada, to pursue and complete my master’s degree, and then Ph.D., in psychology and cognitive neuroscience. During this time, I published papers on a variety of topics utilizing a wide range of experimental methodology, including neuroimaging techniques such as fMRI, EEG, and MEG. Following my Ph.D., I was offered a role as a postdoctoral research scientist in the Computer Science & Artificial Intelligence Laboratory (CSAIL) at MIT, and subsequently, a visiting scientist position at Harvard Medical School. It was during this time that my growing interest in mental health was further cultivated, leading to my role at Stanford Medical School as Director of Research.

You have over a decade of experience researching factors that influence human behavior and brain function. How did you first get involved in psychedelic research?

Throughout my career as a scientist, I had been closely following the growing number of studies finding therapeutic value in a variety of psychedelic substances, including psilocybin. Working within the field of mental health at Stanford, I recognized the limitations of our current approaches, and the need for innovation beyond what was possible with current interventions. The evidence had become too overwhelming to ignore. Substances such as psilocybin could have a profound impact in shaping the lives of millions of individuals. I chose to leave my academic career in pursuit of applying the skills I’d accumulated to advocate for progress in this important field. I joined Unlimited Sciences initially as a volunteer, and soon after accepted the role of Director of Research.

What do you hope to see in the future for psychedelics?

There is an overwhelming amount of anecdotal evidence supporting the therapeutic value of substances such as psilocybin. This evidence cannot be denied, but it is critical for it to be evaluated. Yet, quantifiable evidence is still lacking, largely in part due to the Schedule I categorization of psychedelic substances. Rigorous scientific evidence is needed to more fully understand the mechanisms of these substances as they relate to health outcomes, yet, as a society, we are plagued by misinformation and the desire for hard and fast answers. The evidence points to a far more nuanced story. The mechanisms underlying these substances are complicated, varying from one individual to the next. The same substance, delivered with the same dose and in the same setting, could have vastly different outcomes for different individuals. We must seek to understand these mechanisms in order to advocate for safety and optimization of treatment. Understanding all outcomes, both positive and negative, are crucial for the future of psychedelics. What I hope to see in the future for psychedelics is the overcoming of regulatory and legislative barriers which have prevented research, and the fostering of a slow and steady, data-driven approach to understanding how these substances can move humanity forward. As Slanislov Grof, a leader of psychedelic therapy, wrote in 1980, ‘psychedelics, used responsibly and with proper caution, would be for psychiatry what the microscope is for biology and medicine or the telescope is for astronomy’.

Describe the importance of real-world studies like those offered through Unlimited Sciences.

Most individuals using psychedelic substances such as psilocybin are not doing so within the controlled environment of a laboratory, but rather in naturalistic settings such as their home. As yin is to yang, so is observational research to experimental research. It’s entirely essential for both components to work in harmony to gain a more nuanced perspective of psychedelics use. Clinical evidence, and quantitative data alone, is not enough to understand the full spectrum of these experiences. Real-world studies, such as those conducted at Unlimited Sciences, focus on examining individual experiences and garnering both validated quantitative measures, as well as qualitative, firsthand narrative information which we believe will shift the direction of psychedelics. As a movement, psychedelics has been carried forward by stories. At Unlimited Sciences, we believe these stories, when combined with quantitative data, will open important avenues of research.

There is still a lot of stigma surrounding psychedelic use. What do you wish people understood about psilocybin therapy?

There is a long history of stigma surrounding the use of psychedelics, particularly following the Schedule I categorization of these substances, and yet psychedelics have been used throughout human history. Plant-based psychedelic substances, such as soma, peyote, ayahuasca, and psilocybin, have been used in ancient healing and religious practices for thousands of years. We are merely exploring an extraordinary wealth of knowledge and human history that has always been there and honoring this history using modern scientific methods. We are at the forefront of a renewed psychedelic renaissance, with growing public interest and recognition in the therapeutic potential of psychedelic substances. I believe it is essential that we set aside our stigma and seek to maintain the forward momentum of this renaissance.

Have you had any profound breakthroughs yourself with the help of psychedelics, and would you elaborate, if so?

Many individuals have experienced the achievement of a life goal, only to be met with an empty feeling. This is known as the arrival fallacy. As you work towards a goal, and draw nearer to it, you adjust your feelings and expectations of future success so that arriving at those goals feels far less satisfying than you expected. Years ago, towards the end of my Ph.D., I experienced this phenomenon firsthand, resulting in a difficult time which saw me questioning many of my life’s choices, and facing a loss of meaning and purpose in my life. After traditional medicine and therapy had failed in helping me to overcome these challenges, I turned to psychedelics with an open heart. Although this journey was difficult, as psychedelics are not a panacea, I felt a shift inside of myself during these experiences which reignited the spark I needed to move forward. I found value and meaning once again. Since this time, I recognized the necessity of understanding these multifaceted substances so that they could be used for the benefit of millions of others.

What is something you hope to achieve as Research Director at Unlimited Sciences?

We are facing a paradigm shift in psychedelics that could see a new wave of research reveal its full therapeutic value. As Research Director at Unlimited Sciences, I hope to achieve a standard of research that will have a significant positive contribution to the direction of this movement. We are seeing only the very tip of the iceberg, and by combining data-driven methods and narrative experiences, we can realize the extraordinary benefits of psychedelics.

If you plan to use psilocybin and would like to contribute to the psychedelic research Matt is conducting at Unlimited Sciences, please consider signing up for our study today. We are accepting participants for just 4 more weeks!