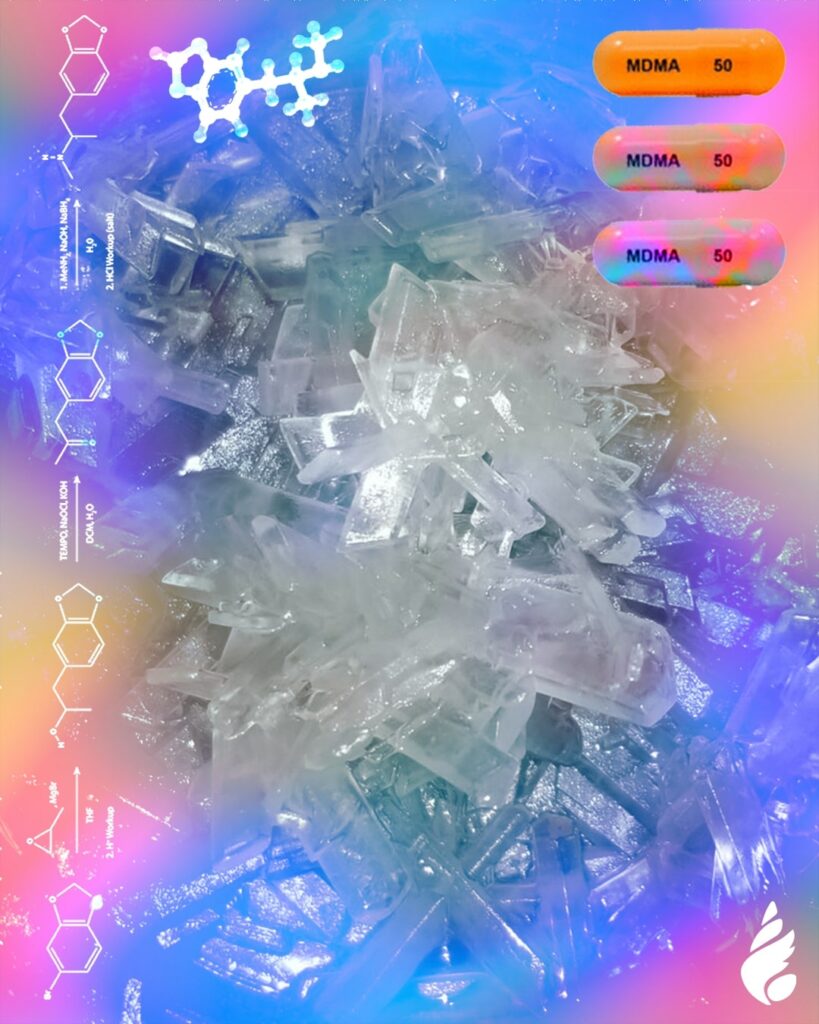 By Trey Brasher | 8 min read – (without the chemistry section)

3,4 methylenedioxymethamphetamine is perhaps one of the most coveted clandestinely produced chemical products of the last 35 years.  Until recently, the only way to have an experience of an MDMA ‘roll’ was curtesy of clandestine chemists working in clandestine drug laboratories to produce a molecule valued for everything from enhancing experiences at raves and parties to deepening connections between sexual partners.

Now with MAPS on the brink of FDA approval for MDMA assisted psychotherapy for PTSD, the synthetic history of MDMA is again in the spotlight.  On December 20th, 2021, MAPS published the first ever certified good manufacturing practices (cGMP) synthesis of MDMA using a novel, and therefore patentable, synthetic route.  The paper is packed with references to clandestine MDMA production.  The not-so-subtle tip of the hat to illegal MDMA chemists appears to be MAPS’ and Rick Doblin’s way of indicating that during the 37 years of MDMA prohibition, it has been these chemists who kept the therapeutic power of MDMA alive.  MAPS’ paper describes the production of up to 5kgs of 99.4% pure MDMA hydrochloride, which it explicitly states, is the most MDMA ever produced outside of a clandestine drug lab11.

A Brief History of MDMA

MDMA was first synthesized by Anton Köllisch in 1912 for Merck Pharmaceuticals in Darmstadt, Germany and patented in 1914 as a series of synthesis intermediates to the haemostatic drugs hydrastinine and methylhydrastinine4.  It was referred to not as MDMA but methylsafrolamine. The compound enjoyed a life of obscurity as a synthetic intermediate until Merck revisited MDMA in 1927.  In search of adrenaline or ephentonine (ephedrine) like compounds using safrole as the starting material, Merck chemist Max Oberlin noted the structural similarities between MDMA and adrenaline and ephentonine. This rekindling of research was likely spurred by the lapse of MDMA’s patent protection; the methylhydrastinine synthetic routes patent expired in 1927 and also utilized safrole as a naturally derived precursor.  Oberlin conducted basic chemical studies comparing MDMA and two eugenol analogues to ephedrine. The papers resulting from these studies, however, appear to have been destroyed during Allied bombing raids on Germany during WWII4; they were the first studies to examine MDMA as a potential drug.

Structurally, MDMA can be viewed as a ring fused catecholamine (based on 3,4, dihydroxyphenethylamine), the base of dopamine, norepinephrine, and adrenaline; these neurotransmitters are collectively called catecholamines.  Tying the two hydroxyl groups together with a methylene bridge produces the 1,3-dioxole ring.  Methylation of the sidechain in alpha position and methylation of the amine nitrogen derive the structure of MDMA from the structure of the canonical catecholamine, dopamine.  While it is possible to produce MDMA from catechol or dopamine5, this example illustrates the structural similarity observed by Oberlin rather than a practical route for synthesis.

MDMA was not tested on animals until 1953, as a part of the US Army’s search for militarily valuable chemicals.  Archives suggest a Merck employee named Wolfgang Fruhstorfer undertook the first pharmaceutical human trials in 1959 with the intention of discovering new stimulant medications.  Results were never published, and Merck again abandoned MDMA.  The US military tested MDMA a second time in 1959-1960 as a part of Project MK ULTRA, ultimately killing a research participant with an overdose and abandoning MDMA as well.  MDMA was not tested on humans for publication in the scientific literature until the late 1970’s, when legendary chemists Alexander Shulgin and David Nichols published a paper18 describing its subjective effects as “evok[ing] an easily controlled altered state of consciousness, with emotional and sensual overtones”.  Due to its increasing popularity as a “recreational drug” after its rediscovery by Shulgin, the DEA emergency scheduled MDMA into Schedule 1 effective from July 1st, 1985.  Rick Doblin famously pledged to found MAPS the day that the DEA finalized the scheduling of MDMA and chartered MAPS in 1986, making the publication of the cGMP MDMA synthesis, with all its subtle odes to clandestine synthesis, all the more meaningful.

The following is a review of major clandestine and non-clandestine synthetic routes to MDMA (skip this section if you are uninterested in the pure chemistry):

In general, synthetic routes to MDMA classically rely on starting material with a preformed methylenedioxybenzene ring system (piperonyl moiety) and employ an alkene substituent which is oxidized to produce a synthetic intermediate which is then aminated and reduced to the secondary amine.  The freebase is then salted out and recrystalized, yielding the desired product – MDMA17.

According to most literature sources, the Markovnikov halogenation and Sn2 amination of safrole to MDMA was discovered by Binieski and Krajewski in 1960 without their awareness of Merck’s expired patent of the same synthetic route11,17).  This is effectively the simplest synthesis of MDMA; halogenate the terminal alkene of safrole in Markovnikov fashion using an acid halide. Hydrobromic acid is often employed as bromine maximizes the yield of the second step. Methylamine is added and the halogenated precursor undergoes an Sn2 amination yielding MDMA in two steps with a poor yield (as compared to other discussed routes).

Safrole is oxidized catalytically in the presence of water and oxygen in a Wacker process, yielding methylenedioxyphenyl-2-propanone or MDP2P. Reductive amination is achieved via nucleophilic attack of the carbonyl by methylamine, resulting in an imine which is reduced to the amine using catalytic hydrogenation mostly commonly achieved with a mercury aluminium amalgam in a concentrated hydrogen chloride solution11.

Piperonyl nitropropene can be made from helional or used as the starting material.  The nitropropene is subjected to catalytic hydrolysis and loss of nitrous oxide in a Nef reaction, yielding MDP2P.  The resulting MDP2P is converted to MDMA by reductive amination with ethanolic methylamine and sodium cyanoborohydride or by any other discussed reductive amination11.

Oddly, MAPS paper leaves out this synthetic route, while discussing a range of other safrole based syntheses.  In the first step, safrole undergoes a base catalyzed rearrangement to the conjugated alkene homolog isosafrole, proceeding via deprotonation at the benzyl position, the shift of the double bond and resulting lone pair in conjugation, and protonation of the lone pair at the terminal carbon, forming the thermodynamically favored product. The internal alkene is dihydroxlated with a peroxy acid and subjected to acid catalyzed pinacol/pinacolone rearrangement, wherein a ketone is formed, forcing a 1,2-hydride shift and a loss of water from the benzylic position.  The resulting MDP2P is subject to reductive amination with methylamine per other routes.  This route is discussed in Hamilton’s Pharmacopeia in the episode titled A Clandestine Chemist’s Tale, thought to be the first full recording from start to finish of a clandestine MDMA synthesis10.

As mentioned in the MAPS paper, a route was reported in 2010 involving a Curtius rearrangement of the carboxylic azide of to the isocyanate and then carbamate formation to protect the nitrogen from being methylated to the tertiary amine16.

In MAPS new synthesis, 5-bromo methylenedioxybenzene is treated with magnesium bromide forming a Grignard, which is reacted with methyloxirane to form a propanol sidechain.  The sidechain is oxidized to MDP2P and subjected to reductive amination in a single step with sodium borohydride as the reducing agent11.

Numerous other routes to MDMA exist, this is only a short review of the most popular and most chemically interesting.

MAPS and the Future of MDMA

MDMA received the FDA ‘Breakthrough Treatment’ designation for PTSD in 20181.  This ‘Breakthrough Treatment’ designation is given to drugs for which Phase 2 clinical trials “demonstrate substantial improvement over available therapy on a clinically significant endpoint(s)”1.  In these Phase 2 trials, three quarters of participants (76%) no longer meet the criteria for PTSD one year after the last administration of the drug12. 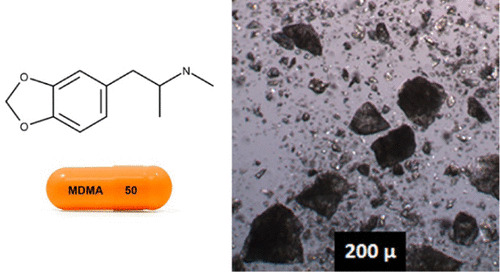 Instead of receiving any VA or NIH support, the current Phase 3 trials are being entirely funded by public donations. MDMA has also been shown to be effective in treating PTSD in civilian first responders, including police officers, some of the very members of society tasked with suppressing drugs like MDMA9.  MDMA is also being considered or is already in clinical trials for the treatment of autism spectrum disorder3, female sexual disfunction13, addiction14, and other ailments15.

It is unlikely that the medical availability of MDMA through MAPS or MAPS sponsored MDMA clinics will reduce the demand for clandestinely produced MDMA – in fact, until MDMA is legally available for use outside a clinical setting – the publicity resulting from the rescheduling and medicalization will likely increase that demand.  Chemists will likely continue to risk their freedom and their lives to provide consumers with MDMA.  Both high quality, carefully synthesized MDMA as well as impure and adulterated street MDMA will continue to be produced and distributed as it has since MDMA’s rediscovery in the 1970’s, by an ever evolving cast of synthetic routes; Perhaps now even using MAPS’ own patented cGMP synthetic route.  If the FDA approves MDMA, perhaps ‘copyright infringement’ will now be added to ‘manufacture of a Schedule 2 controlled substance’ in the prosecution of unfortunate clandestine MDMA chemists.

“There were virtually no social problems caused by MDMA before [the DEA] moved to make it illegal.  The problem was, people were using the drug without problem.  And not only were these people using the drug without problem, they were not your stereotypical drug users.  The kind of people who were using MDMA were perceived as a threat by the DEA to the whole idea of drug prohibition and to the whole idea that these drugs are somehow inherently fundamentally dangerous.”

[3]Danforth, A. L. (2019). Embracing neurodiversity in psychedelic science: A mixed-methods inquiry into the MDMA experiences of autistic adults. Journal of psychoactive drugs, 51(2), 146-154.

drug″) and methamphetamine in Toronto by unsuspecting users of

[7]Millard, M. (October 8–14, 2004). “This is your brain on drugs: Rick Doblin thinks pot, ecstasy, and other psychedelics could unlock the human mind — and he wants to bring them to Harvard, the FDA, and a doctor’s office near you”. Boston Phoenix. Archived from the original on 20 November 2013. Retrieved 5 March 2022.