Where are Psychedelics Legalized in 2022? 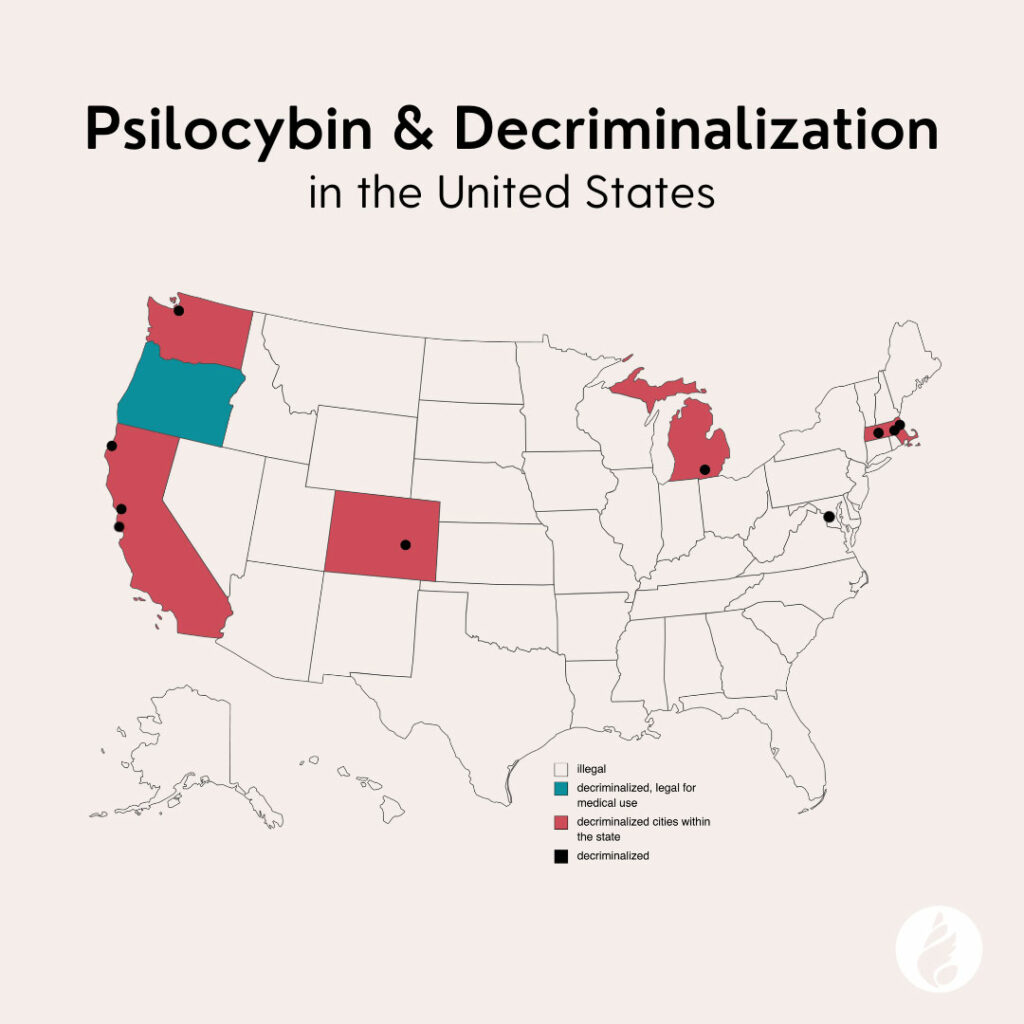 Psychedelics have found their way to the forefront of conversations like never before. As more states and countries move to decriminalize low-level possession and grant access to psychedelic therapies, it poses the question: Where are psychedelics legalized?

Before diving into the specifics of psychedelic policies in the United States, it’s important to understand the differences between legalization and decriminalization. When a substance is decriminalized, the production, sale, and possession of it is technically still prohibited, but isn’t prosecuted to the same extent as when the substance is illegal. When prosecuted, penalties are significantly reduced to fines, confiscation, or the lowest level of legal sanctions. Simplified, many people consider decriminalization to be the middle point between prohibition and legalization.

On the other hand, when a substance is legalized, there is a complete removal of criminal penalties that allows for the substance to be bought, often as long as certain criteria are met (e.g. quantity on hand, substance type, age of user, etc). This can be most easily compared to the medical and recreational cannabis policies in the United States. In some states you can legally purchase the substance, but only with the right paperwork or approval of certain doctors. In other states where there is recreational use legalization, it removes the need for a medical recommendation, but limits the possession amount. When considering psychedelics like psilocybin, LSD, MDMA, and ketamine, legalization may follow a similar route. That is, we may see these substances legalized but only with the care and supervision of a medical professional.

With this understanding of decriminalization vs. legalization, we can start to approach the different psychedelic use policies in place throughout the United States.

California: While statewide psychedelic use is considered illegal, Oakland, Santa Cruz, and Arcata have passed their own decriminalization efforts. In Oakland and Santa Cruz, the possession and cultivation of psilocybin, iboga, mescaline cacti [Peyote & San Pedro], as well as the ingredients in psilocybin are considered the lowest law enforcement priorities. In Oakland alone, purchasing, transporting, and the distribution of these psychedelics is under the same category of importance. Similarly, Arcata voted unanimously to declare that the possession, cultivation and distribution of entheogenic substances like psilocybin and ayahuasca be decriminalized, while the commercial sale and manufacturing remain prohibited.

Colorado: Denver paved the way in 2019, becoming the first U.S. city to decriminalize and reduce penalties on psilocybin mushrooms. Unlimited Sciences co-founders Del Jolly and David Champion were part of the grassroots efforts to make this happen. Specifically, law enforcement in Denver are prevented from using city funds to criminalize personal use and possession of psilocybin, making it one of the lowest law enforcement priorities. The decriminalization initiative created the Denver Psilocybin Policy Review Panel, required to report back to the city on the impacts of the new laws. The 2021 Comprehensive Report was full of promising findings and recommendations.

Massachusetts: Four cities in Massachusetts decriminalized the growing, possession, or use of entheogenic plants, including psilocybin and ibogaine. The cities include Somerville, Cambridge, Northampton, and most recently Easthampton.

Michigan: Entheogenic plants and plant compounds are decriminalized in Ann Arbor, Michigan. This includes cultivating, purchasing, transporting, distributing, engaging in practices with, or possessing natural psychedelics. City funds are not to be used for investigations, arrests, or detainments and the district attorney is prohibited from prosecution of said psychedelic cases. To celebrate the city’s psychedelic decriminalization, Ann Arbor hosted the first ever annual Entheofest in September 2021, honoring sacred plant medicine.

Oregon: In an amazing victory, Oregon became the first state to decriminalize the recreational use of psychedelics statewide, while simultaneously legalizing psychedelics for medical use. Criminal penalties were eliminated for all illegal drugs, including cocaine, heroin, oxycodone and methamphetamine, as well as all psychedelic substances like LSD, psilocybin and MDMA. Oregon also became home to the country’s first state-licensed psilocybin-assisted therapy system, legalizing psychedelics for mental health treatment under medical supervision.

Washington State: Seattle is the largest city in the United States to decriminalize psychedelics. Under their legislation (passed by a unanimous vote) noncommercial activity around a wide range of psychedelic substances, including the cultivation and sharing of psilocybin mushrooms, ayahuasca, ibogaine and non-peyote-derived mescaline is ordered to be among the lowest priority for the city’s law enforcement. Taking it a step further, the policy addresses the city council’s intent to “determine what changes would be necessary to protect from arrest or prosecution of individuals who cultivate entheogens” and to implement said changes through future ordinances.

Washington D.C.: In November 2020, common sense drug policy reforms saw a big win in the District of Columbia, where psilocybin, ibogaine, Peyote and Ayahuasca/DMT were all decriminalized. Specifically, “Non-commercial planting, cultivating, purchasing, transporting, distributing, engaging in practices with, and/or possessing entheogenic plants and fungi are considered lowest enforcement priorities by the DC Metropolitan Police, banning the investigation and arrest of persons 18 years of age or older for these practices.” The initiative was approved by 76% of voters.

There continues to be pending legislation across the country to either decriminalize or legalize varying psychedelics should the initiatives be passed. These presently include statewide and or local level policies in the following states: California; Colorado; Michigan SB-0631; Missouri HB-2429; New Hampshire HB-1349; Oklahoma HB-3414; Virginia HB-898; Washington State SB-5660.

Become a Part of the Movement

There is no better time than now to become a part of the psychedelic movement that is upon us. Opportunities like our real-world psilocybin study combine the power of data and lived experiences to serve the community, educate the public, and inform common sense practices and policies.

Other ways to get involved include becoming a leader in your community through advocacy, education, and people-led movements. If you’re not sure where to start, our friends at Decriminalize Nature put together a great resource and comprehensive guideline for organizers who are interested in pursuing local policy changes to help lessen the criminalization of psychedelic substances. The guidebook includes press release templates, sample emails, fact sheets, model legislation and more. An excerpt from the introduction reads:

Finally, we encourage you to spread the word about the therapeutic usage of psychedelics for mental-health and well-being as credibly and often as you can. Our Instagram is a great place to find and share current education and research efforts.